At re:Invent, various Amazon speakers tout the security, availability, and performance of the AWS Global Backbone, a private Internet Protocol (IP) network purpose-built for moving customer data across the world. The talks are pure gold for network engineers as Amazon is very transparent in discussing the design of the backbone. Why should AWS customers care about the details of the private backbone? This subject hasn’t much coverage outside of re:Invent. Let’s fix that in this post.

What are the key concepts about the backbone that enterprise cloud architect should know?

An underlying theme throughout this post is control. AWS could have relied on transit providers to interconnect its regions and edge locations. By doing so, AWS would have been heavily dependent on third parties, which would have limited growth and innovation and prevented end-to-end ownership of the customer experience. Features such as Global Accelerator–based on IP anycast– would have been an engineering nightmare to deploy without the Global Backbone. I believe that AWS’s ability to maintain its dominance of the public cloud industry would be severely degraded without the massive investment in the AWS Global Backbone.

The AWS Global Backbone is a carrier-class backbone, which means it is built to standards of the largest ISPs in the word (known in the industry as Tier 1 ISPs). AWS has redundant 100 Gb/s circuits between regions, with plans to move to 400 Gb/s. The network is completely private; AWS owns the infrastructure from end-to-end, with the exception of some short- and long-term fiber leases. While AWS is known to use its own routers and switches in its data centers, I suspect the WAN uses the same two major router vendors deployed in Tier 1 ISPs’ backbones. Another supposition on my part is that Amazon–with its legion of developers–relies on advanced network automation to manage the network. AWS’s Network Management Systems (NMS) must ingest massive telemetry data from the routers such that engineers have visibility that few companies outside the FANGs possess.

I wrote in my introduction that the AWS Global Backbone is purpose-built. While comparable in many ways to Tier 1 ISPs, this network addresses challenges specific to cloud providers. Tier 1 ISPs make capacity management decisions based on empirical trends. In addition, these networks maintain oversubscription ratios at the provider edge (note that this does not necessarily mean that they are congested thanks to the statistical multiplexing property of packet-switched networks). ISPs are not designed to have 300 Gb/s of data suddenly flood the network in a particular point of presence (POP). AWS must accommodate this exact situation. Workloads can instantly spin up and spin down in minutes, which forces a high degree of over-provisioning of network capacity. While this is an expensive proposition, over-provisioning capacity is superior to the use of complex quality-of-services (QoS) techniques. Keep in mind the QoS is a decision about which packets to drop in the event of congestion. Amazon describes its global backbone as congestion-free.

As of this writing in April 2019, you will not find an official guarantee on the AWS web site that all inter-region traffic will use the global backbone (if anyone can find this please let me know). The statement appears on slides from re:Invent talks as pictured below. 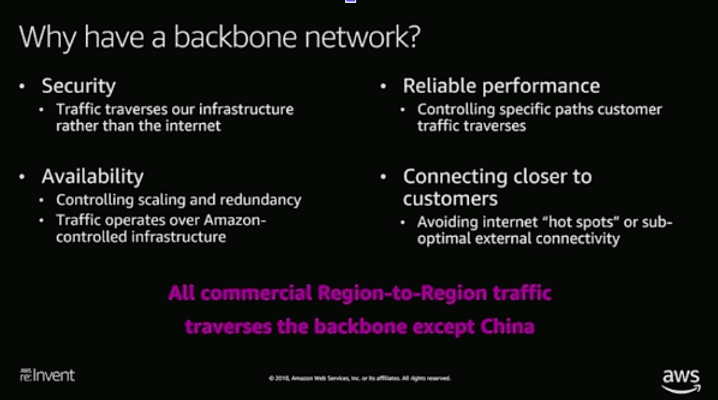 Note that China is excluded.

The takeaway from this discussion is that inter-region traffic is no longer at risk of being shunted to the public Internet; the traffic will use the private backbone. I am unsure why AWS hasn’t moved what it has promised in presentations to the web site.

Let’s change topics to packet size. The AWS Private Backbone has a maximum transmission unit (MTU) of 9001 bytes. Prior to last year, you couldn’t get packets of that size between your data center and VPC as the MTU on Direct Connect links was 1500 bytes. Now the MTU on Direct Connect private virtual interfaces can be set to 1500 or 9001. The ability to transmit large frames should significantly increase the speed of bulk transfers.

Latency is a significant factor in application performance. The AWS Global Backbone is engineered to minimize latency. AWS reduces latency by serving content closer to its users through the edge and Direct Connect locations. While not part of the AWS Global Backbone, AWS Outposts extends the AWS footprint into the enterprise data center, thus minimizing latency for select workloads. Returning to the congestion-free nature of the backbone, user data traffic will have a consistent experience in terms of latency and jitter, both by-products of queuing on congested links.

The final point I’ll make on the AWS Global Backbone involves inter-region data transfer costs. AWS reduces the data transfer rate in half for traffic between the us-east-1 and us-east-2 regions. Typically inter-region traffic costs $0.02/GB. AWS’s costs for establishing circuits between these regions are lower and these savings as passed along to the customer. The reduction to $0.01 GB for us-east-1 to us-east-2 might be a consideration if you decide to add a second region to your AWS footprint.

At Konekti, our core philosophy is that our clients should focus on what they do best–writing innovative applications that generate revenue for the business. Yet the network is fundamental to application delivery and securely moving bits between heterogeneous locations–cloud, data centers, remote branches–can be extremely complex. The AWS Global Backbone plays a key role in this movement of data between AWS regions and edge locations.

For more content on the AWS Global IP Backbone and AWS Networking, check out these two great presentations from re:Invent 2019.

The Reality of Hybrid IT for the Enterprise